West constructed a 1,000 foot long deep draft dock in Dutch Harbor, Alaska for D H Ports, LLC. Initially, an existing 700 foot long timber dock and 50,000 square feet warehouse were demolished and removed. We determined that constructing the dock using Open Cellsl® would be fifty percent less expensive than alternative dock designs. After the existing structures were removed, the Open Cell® sheet pile dock was constructed. The dock contains 38 OpenCells® and required the installation of 6,000 tons of sheet pile, in lengths from 30 to 97 feet. As the Open Cells® were being completed, 250,000 cubic yards of shot rock fill quarried from an adjacent rock slope were placed behind the dock face to form a 5 acre pad for the construction of a cold storage facility. 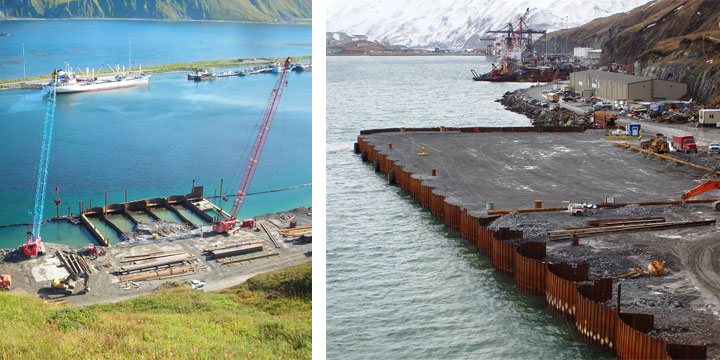 Material quantities during construction included 5,600 cubic yards of concrete, 400 tons of reinforcing steel, 15 tons of structural steel, as well as the electrical and mechanical materials needed to construct 2 miles of underground utilities, including water, sewer, electrical, site drainage, and oil water separators. Ninety-one per cent of the work described above was self-performed and was completed in December 2008, with a total cost of $35.3 million. Each phase of the work was completed on time and within the preliminary cost estimates provided by West. 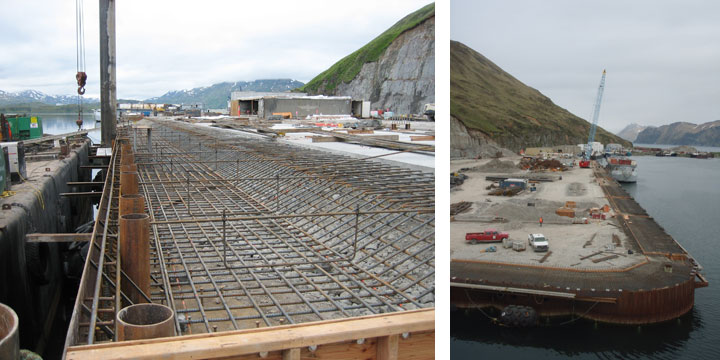